There have always been branding fails, but in the digital age, public disapproval can brew faster than ever. Some branding fails have become legendary: there have been motorbike-themed perfumes, illegible logos and Super Bowl buzzkills, while one unfortunate campaign left a sticky pink flood on the streets of New York. Here’s our guide to some of the biggest and worst branding fails in history. 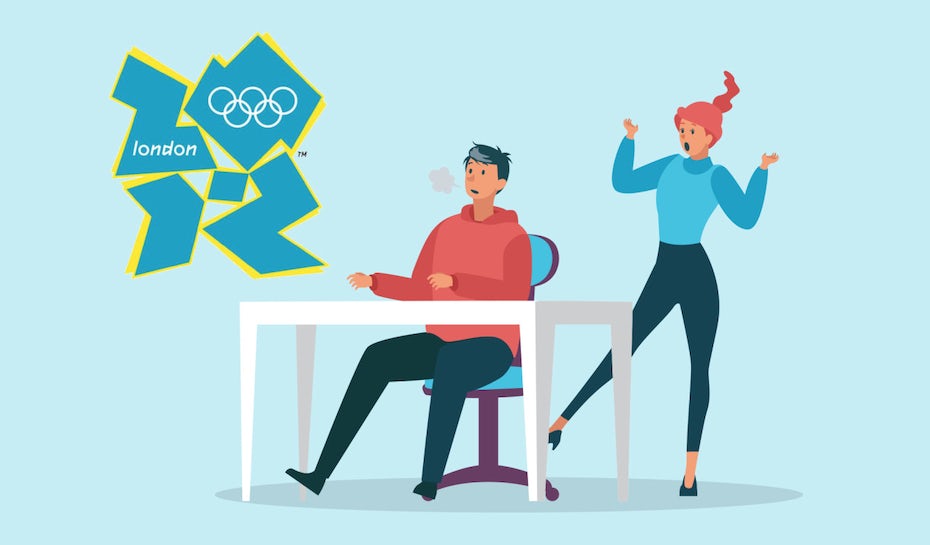 Branding fails provoke strong reactions. Some people may feel betrayed by a product that no longer represents their values, while others may just be delighted to see a giant company cut down to size.

But the history of branding fails isn’t just about angry demonstrations or gleeful retweets. These were strategies that companies believed in, and in some cases spent millions of dollars on. But they missed their target and ended up making their brand look unappealing, hypocritical, or just plain confused. If you’re launching a new product or campaign, these big-name missteps help you decide how to market your product—and learn what you absolutely shouldn’t do.

Hitching your wagon to a prominent cause can be a great way to make your brand part of the conversation. But if you don’t walk the walk, your talk may sound a little empty.

Shortly after Black Lives Matter protests swept US cities, Pepsi shot a 2017 commercial in which Kendall Jenner crosses a street protest’s lines to give a police officer a can of Pepsi. Calls to boycott the brand soon followed, with observers noting that Jenner passes her wig to a Black woman before joining the protest, and wondering whether decades of racial oppression and violence can really be resolved by a model with a chilled can of pop.

Then in 2019, North Face took pictures of models wearing their outdoor clothes everywhere from Scottish mountains to Brazilian national parks and posted them to numerous Wikipedia pages. The result: when people looked up some locations and activities—on a site that’s defined by its independence—they landed in the middle of a PR campaign. Wikipedia and its users were not amused, and North Face scrapped the campaign and issued a contrite statement saying that they “believe deeply” in Wikipedia’s mission and “apologize for engaging in activity inconsistent with those principles”.

The problem, of course, was that their actions showed they had very little respect for Wikipedia’s proudly objective editorial stance. Like Pepsi, they’d engaged with an issue on a very surface level, and the gap between their pious message and profit-chasing tactics made them look foolish.

Learning: Linking your brand with a cause you’re already deeply connected with is one thing, but if the public senses hypocrisy, they’ll hit you where it hurts. 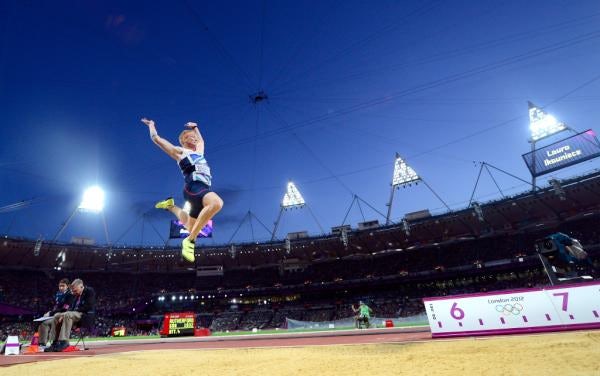 The London Olympics soared. Its logo, less so, via London2012

A logo is brand central. Who can forget the ornate but instantly recognizable curls of Coca-Cola, or Apple’s bitten fruit? When logos work, they’re modern alchemy, combining brand associations and sharp design. But when they don’t work, they’re a bewildering and often very expensive mess.

Take the 2012 London Olympics logo, which sought to “make people reconsider Olympics, to think about them in a different way,” according to branding agency Wolff Olins’s then managing director, Ije Nwokorie. The Wolff Olins-designed logo certainly disrupted something, but arguably it was people’s ability to read: while the games went well, the logo was a cramped, ugly mess.

The London Olympics branding at least has some fans, but clothing giant Gap’s attempt to rebrand itself fell so flat it backtracked within a week. The company flipped its old logo—a simple, clean text-in-a-box badge that spoke to its line of classic Ts and jeans—for an alternative that set Helvetica lettering over a small blue box that screamed “anonymous accountancy firm.” Developing and switching the logo back is said to have cost Gap $100 million.

Learning: Disruption can fall flat: the best logos tend to speak to brands’ strengths and heritage, rather than just aping current styles or trying to pull a brand in a different direction.

Burgers, bicycles and knowing your customer base
— 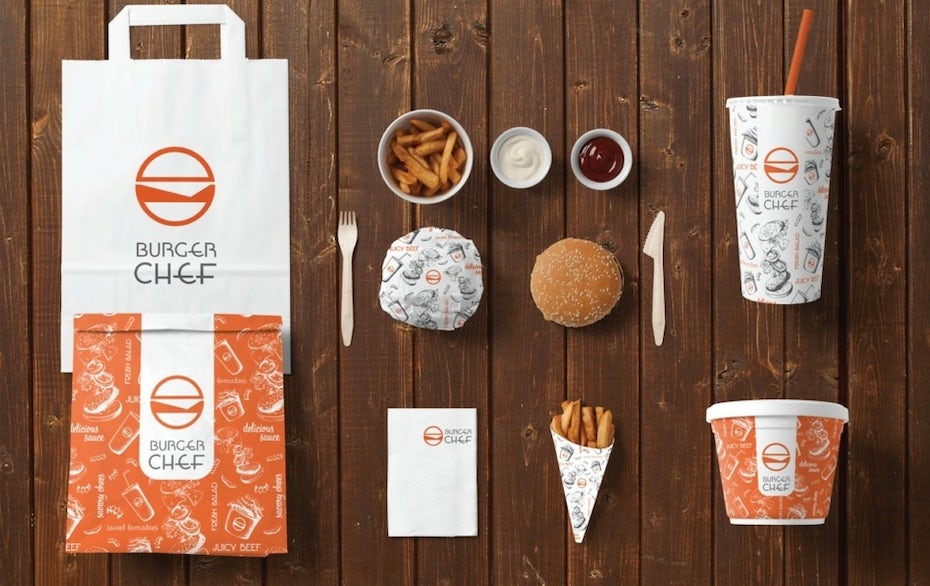 Fast food can be sophisticated by Khramova

In 2013, keen to bring health-conscious eaters into their restaurants, Burger King introduced Satisfries to their menu. Thanks to a less porous batter, Satisfries contained 30% fewer calories than the chain’s standard fries. But a combination of a higher price, a tongue-twisting name, and the fact that most visitors to Burger King weren’t after healthier food doomed the new product. It wasn’t helped by a would-be edgy social media campaign that used the hashtag “WTFF”—which meant “what the french fry” but was drowned by less family restaurant friendly Tweets.

Arch Deluxe burger breakdown from an advertisement via Wikipedia

They weren’t the first fast-food chain to try to attract a more sophisticated audience: back in 1996, McDonald’s sought to attract discerning adult customers with a vast marketing campaign spearheaded by the Arch Deluxe. “The burger with the grown-up taste” was promoted with a campaign that focused on its “secret” mustard and mayonnaise sauce and classy ingredients. But while high-end burgers are big business these days, the product was a poor fit for a family-friendly restaurant whose customers appreciated old favorites at a competitive price. The campaign cost McDonald’s $300 million; the Arch Deluxe had been phased out completely by 2000.

These fast-food fails are just the tip of an iceberg lettuce. Other brands that misread their target market’s appetite for new products include gun brand Smith and Wesson, who briefly sold mountain bikes, and iconic motorbike-makers Harley Davidson, who had several attempts at making perfume.

Learning: Diversification can open up profitable new areas, but not sticking to what you’re good at is risky. If the new products cut against your brand persona, loyal customers may feel confused or let down.

Snapple and Nationwide get the wrong kind of attention
—

The world’s largest popsicle, in New York City, in the summer? It sounds almost too perfect, and it was. Instead of gathering a Guinness world record and some excitable social-media coverage, soft-drink maker Snapple’s 2005 PR stunt left kiwi and strawberry ooze spreading over Union Square. “We didn’t see the pop,” a local worker told the New York Times, “just the pink water flowing down the street.”

The combination of a vibrating delivery truck and high temperatures may have melted the center of the giant flavored-ice sculpture, which Snapple had to hurriedly tidy away. In place of the 171.5 ton giant, they ended up presenting the supporting ice sculptures, which had stayed frozen but were about the same size as a regular TV.

Further evidence that if you’re going to take the biggest stage, you’d better be damn sure you command it, comes from the 2015 Super Bowl. The game saw the New England Patriots’ edge out the Seattle Seahawks in front of 114 million viewers. The first-half ad break saw a deeply bleak commercial for Nationwide Insurance about a boy who never got to experience life’s great milestones—because he died young.

The ad had apparently resonated with test audiences, but sandwiched by the razzmatazz of the Super Bowl, it felt like a jarring piece of fear-mongering. The spot alone cost over $4.5 million, which is a lot to pay for a furious Twitter storm. Nationwide claimed to be glad they’d started a conversation, but the next year they sensibly cut their losses and didn’t run a commercial.

Learning: Attention-seeking is fine, but if you’re not well prepared, and don’t read the mood right, you can end up looking very stupid. 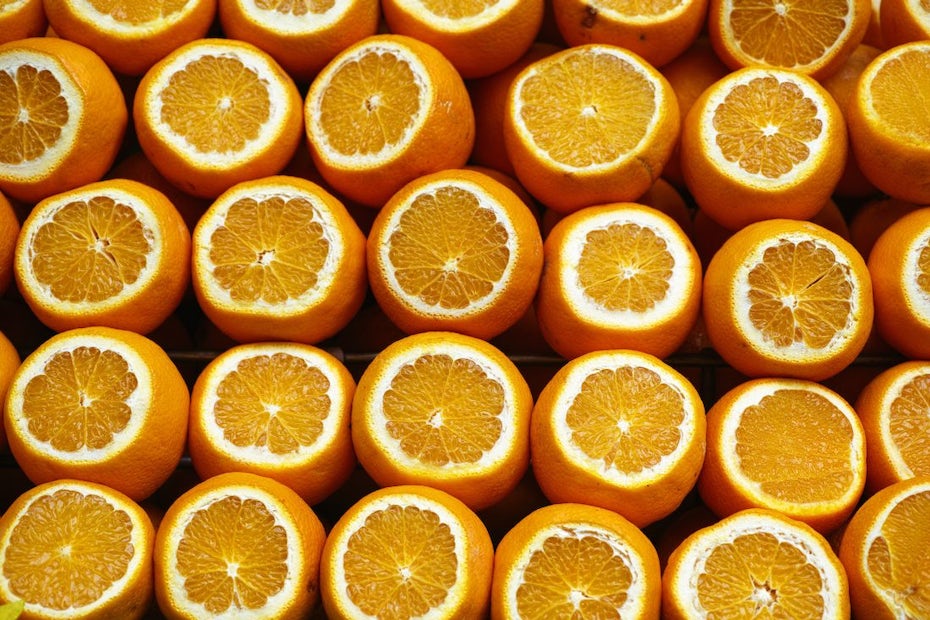 Tropicana didn’t change their oranges, but they did change their branding via Engin AkyurtDrinks giants lose loyal customers
—

Changing the packaging on a product is usually a fairly safe move—but a branding fail hit Tropicana to the tune of $50 million. The firm’s flagship orange juice had always featured an orange with a straw in it. The company decided to change tack and instead show the juice itself, gleaming in a clear glass, with the opening cap remodeled to look and feel like a small orange and the strapline focusing on the juice’s 100% purity. 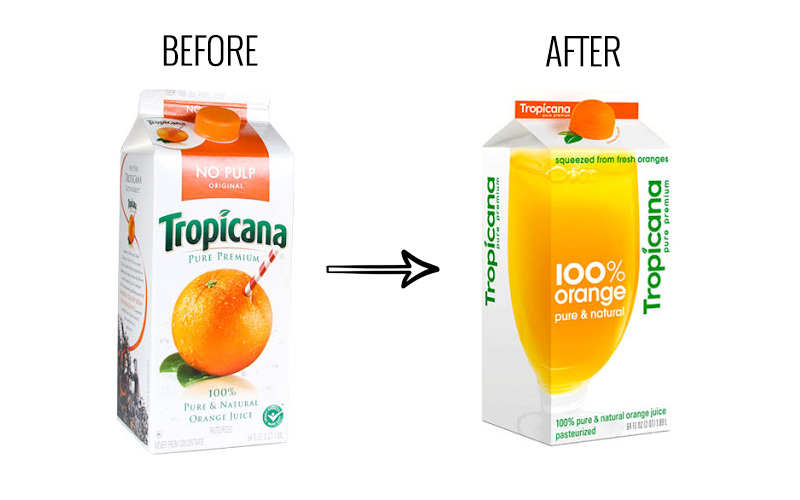 Tropicana’s rebranding was far from fruitful, via Quezco

The change aimed to attract health-conscious consumers, but customers found the new branding looked cheaper (something perhaps compounded by the fact that the drink’s “pure premium” message was now less visible), while many had an emotional connection to the image of the straw-pierced orange. By switching multiple parts of the product design at once, Tropicana alienated their market. Sales dipped 20%, and the company soon went back to its original artwork.

The most famous soft-drink fail came from Coca-Cola, whose 1985 New Coke has become a legendary disaster. Aware that they were losing market share to Pepsi, and believing Boomers were transitioning to diet drinks, Coke decided to hook a Gen X audience with a sweeter cola. The drink that became New Coke performed well to focus groups, and Coke made a momentous decision: rather than running the new drink alongside Coke, they would streamline their growing product lines, and jettison the old drink. 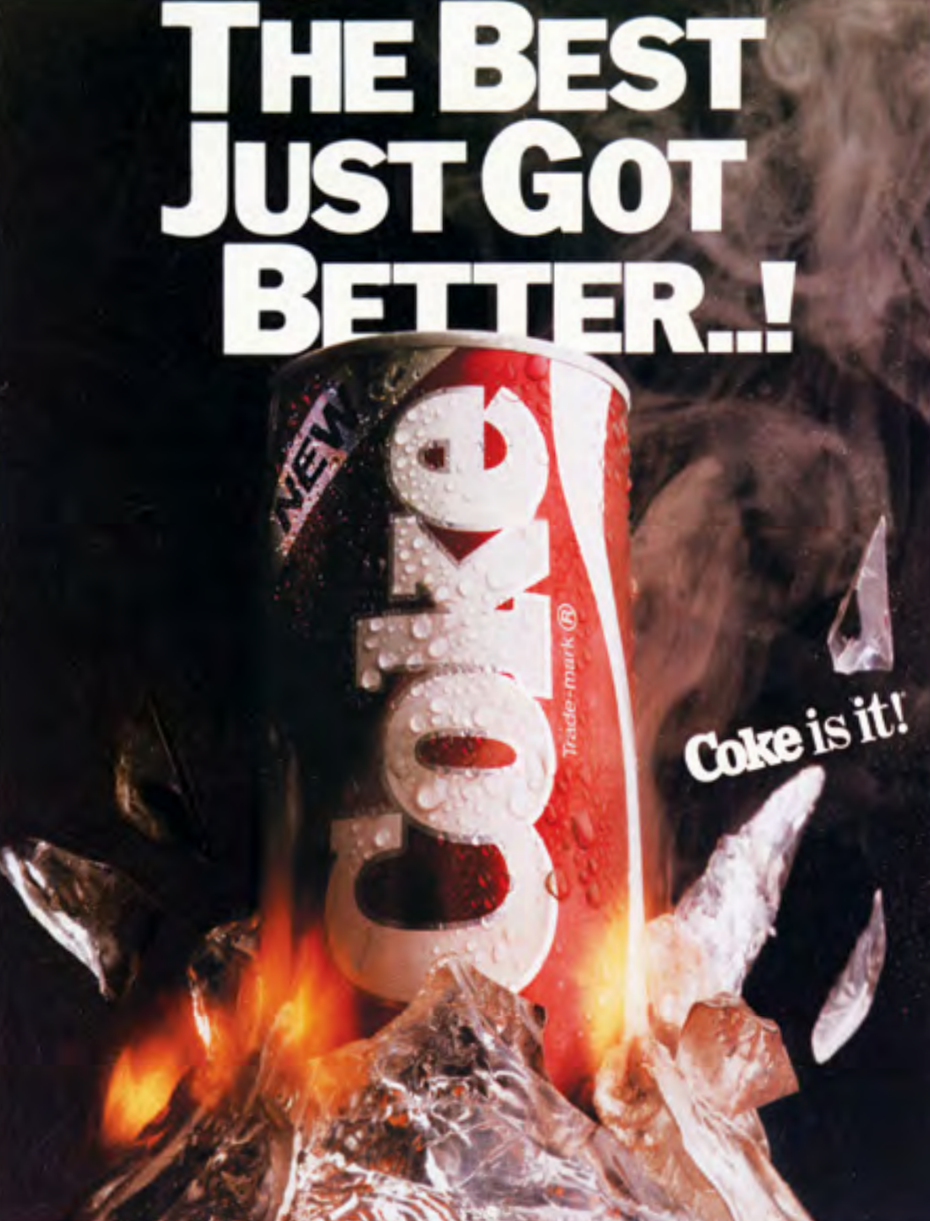 A huge marketing campaign backed the launch, with the old Coke phased out and new cans and bottles, complete with “New” branding and a chunkier font. At first, the signs were good, but discontent was growing, especially in the American South, Coke’s historic heartland. Coke hired a psychologist to listen to some of the complaint calls: they said some callers sounded like they’d just lost a family member. With sales struggling and bottlers raising concerns, after 79 days Coca-Cola accepted failure and reintroduced the old flavor. The move was praised in the US Senate, and by 2002 New Coke had been totally phased out.

Coke’s experience shows the problem of changing a brand that sells itself as “the real thing”. Once you mess with tradition, you mess with people’s memories of their youth, and their stories of who they are.

Learning: suddenly altering a much-loved product, or the packaging it comes in, is dangerous. People like the familiar, and to change multiple aspects of a brand can feel like a threat to your audience, especially when you take away their ability to choose the product they love. Innovation is best done with care.

Branding fails and how to avoid them
—

All of these companies believed in their branding strategies at the time and backed them with millions of dollars of funding. They look absurd with hindsight, and there are lessons to be learned. Brands should only get on board with causes they’re fully engaged with, should treat existing logos with care, should stick to what they’re good at and should be cautious of novelty stunts.

We love to tell stories of branding fails so much that a few have become exaggerated in the telling—the much-mocked Colgate lasagna never really existed, for example. And many companies claim to have pulled something positive from the flames: a Coca-Cola executive said in 1999 that New Coke was a “success” because it “revitalized the brand and reattached the public to Coke”. These case studies should help you build better campaigns, but every brand will fail sometimes. If your marketing doesn’t hit the spot, you can listen, learn—and try again.

Want to get the perfect design for your business?

Our designers can help you create just about anything.

The post Big-name branding fails, and what you can learn from them appeared first on 99designs.